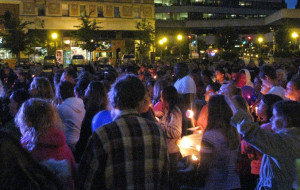 Several hundred people turned out Monday night in downtown Wausau to remember two girls who died in a Friday morning rollover crash and the seven other people injured.

12-year-old Reighlee Stevenson and 12-year-old Deserae Landowski died after the SUV they were riding in rolled over on Highway 52 east of Wausau. The 16-year-old driver and her passengers, many of them children, were on their way to the Eau Claire Dells Park.

Deserae’s mother Kristen Landowski says she was not expecting this much support from the community. “It means the most. At least I know that my daughter was loved and she won’t be forgotten and that everyone here, that’s here to support us, we’re thankful.”

Deserae’s father Manuel Lopez agreed with the sentiment. “It’s just an awesome feeling, she was loved from so many people, it’s crazy, it’s a nice feeling.”

Meanwhile the driver of the SUV will be facing charges later this week. The 16-year-old girl was in court on Monday. The Marathon County district attorney’s office asked for another 48 hours to file charges, and that request was granted by Judge Greg Huber. Huber heard Monday’s proceedings, but is recusing himself since he knows the grandparents of one of the victims.

The driver will be confined to home, and placed on electronic monitoring. The girl’s mother will be staying home two weeks to supervise the girl, and to arrange for other family members to watch her in upcoming weeks. All car keys have to be kept away from the girl as part of the conditions for release.

The court proceedings for the girl’s adjourned initial appearance will continue Wednesday when prosecutors have are ready to file charges. The time and the branch of court have not been determined.