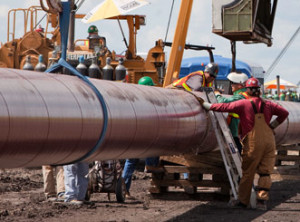 A new petroleum pipeline and a replacement to an older pipeline bringing oil to Superior have been proposed. Wisconsinites will be able to express any concerns they have with that proposal Monday. Pipeline company Enbridge is proposing the Sandpiper project, which would bring crude oil from the Bakken oil fields in the Dakotas about 600 miles across Minnesota to a refinery in Superior.

Ben Callan, Department of Natural Resources Water Regulations and Zoning Specialist, said the Sandpiper proposal will need an environmental impact statement, and Monday’s meeting is one opportunity for people to express their views about the two pipe projects. “So, we have an application from Enbridge Energy to construct a pair of liquid petroleum pipelines, and the department will draft an environmental impact statement, but we want the public to help us frame what should be included.”

Callan says the proposal has to go through similar scrutiny in Minnesota and North Dakota, and the Wisconsin portion is just a small piece of the total project. “The overall length of Sandpiper is about 600 miles from North Dakota, through Minnesota, and into Superior. The portion that impacts Wisconsin directly is about 14 miles.”

The meeting runs from 3:30 to 8:00 on the Wisconsin Indianhead Technical College Superior Campus. Written comments on the environmental impact statement outline draft should be received by Tuesday, September 30. Meanwhile, the Minnesota DNR has requested that Enbridge modify the route through that state, away from environmentally sensitive areas.