You are here: Home / Health / Medicine / Push to stop superbugs from antibiotic abuse 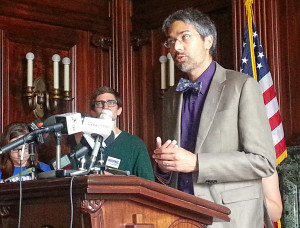 A group of doctors and other advocates call for an end to antibiotic abuse on factory farms.

Ben Knuth is with WISPIRG, a state consumer advocacy group, working to stop so-called superbugs. “We’re trying to eliminate the use of antibiotics in animals that are healthy.”

There’s a nationwide effort to end the widespread overuse of antibiotics, which has resulted in a declining effectiveness of the drugs.

Dr. Dipesh Navsaria, MPH, MSLIS, MD, a pediatrician and an officer of the Wisconsin Chapter of the American Academy of Pediatrics. He explains bacteria that used to be easily treated with standard antibiotics are now resistant to those very drugs, creating a need for stronger more expensive antibiotics.

“The risk we run is that at some point we will not have an antibiotic that actually will treat some of these organisms if the current trends continue. The pace of how quickly we can create new antibiotics that these bacteria are not resistant to is nowhere near as fast as how quickly they’re mutating.”

Experts blame factory farms for being a major contributor to the problem, saying a big percentage of antibiotics are typically used for disease prevention or to help animals gain weight more quickly.

Dr. Carol Spiegel, PhD., Professor of Microbiology Emerita, Department of Pathology & Laboratory Medicine, University of Wisconsin Madison, says terminating the use of antibiotics could prevent additional resistance from developing and potentially regain the use of some current antibiotics.

At least two million Americans are sickened by drug-resistant bacteria each year, more than 23,000 die, according to the CDC.