You are here: Home / Health / Medicine / State loses out by not expanding BadgerCare 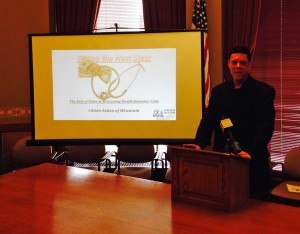 Are health insurance rates in Wisconsin higher than necessary? If they are, one groups argues it could be because of Governor Scott Walker’s decision not to accept a full expansion of federal funding for BadgerCare.

Robert Kraig is with Citizen Action of Wisconsin, which released a report showing Wisconsin insurance rates average $250 more per year because of Walker’s decision. “What this data found is that, not only turning down the Medicaid money had no impact on people on Medicaid, on BadgerCare, it impacted all people in terms of their insurance rates,” Kraig said. “For not taking the Medicaid money, it was over $250 a year for every person. And that comes out of the general economy and out of peoples family budgets.”

A Legislative Fiscal Bureau estimate also doesn’t come up in the governor’s favor – the agency found the state could have saved more than $500 million over three and a-half years, and served some 87,000 more adults a month under BadgerCare Plus.