You are here: Home / News / State’s challenge to gay marriage ruling set for next week 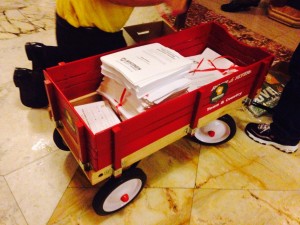 An appeal to the attorney general to stop defending Wisconsin’s gay marriage ban. Megin McDonell with the group Wisconsin Unites for Marriage said they delivered more than 3,000 petition signatures to the office of state Attorney General J.B. Van Hollen on Thursday, as a federal appeals court prepares to hear the state’s challenge to a judge’s ruling that Wisconsin’s ban on gay marriage should be overturned.

“We’ve been collecting petitions to the attorney general to drop the appeal,” McDonell said. “There’s a lawsuit in every state now that doesn’t have freedom to marry.”

McDonell said history is on the side of that freedom – and public opinion is trending that way as well, with eroding support for the constitutional amendment which passed in 2006 with the support of nearly 60 percent of state voters. “The most recent Marquette poll had 56% of Wisconsin voters in favor of extending marriage equality,” she said.

Oral arguments on the Wisconsin challenge in combination with a similar decision in Indiana, are scheduled for Tuesday before the 7th U.S. Circuit Court of Appeals in Chicago.