You are here: Home / Education / UW-Platteville ready for students, 2 months after tornadoes touch down 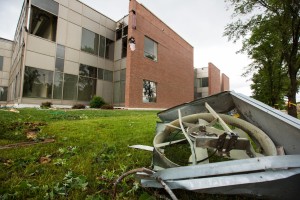 There’s a lot of progress in the recovery effort after two tornadoes hit the UW-Platteville campus on the night of June 16th, causing at least $10 million worth of damage. “The campus, I’m pleased to say, is ready for the students. We’re not done. It’s an important distinction. The goal is to be ready,” says Rob Cramer, Vice Chancellor for Administrative Services at the university.

The big challenge is Pioneer stadium and all the debris. Cramer says there’s a mixture of rock and glass strewn about the landscaping. He says school officials sought advice from other colleges that had experienced similar issues. “One of those institutions had removed 90 percent of the sod and top soil in the area where they had debris and that was about 15 years ago. They regret not having done 100 percent because they’re still getting people with lacerations in those areas.” 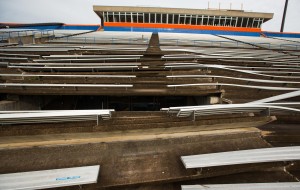 University officials are working with the insurance company to get 100 percent remediation, he says, so they won’t have to be dealing with cuts in the future from remaining shards of glass.  Some students have already moved into dorms unaffected by the storm. The official move-in day is this Friday.

UW-Platteville officials addressed the UW System Board at their meeting in Oshkosh last Friday, 22nd.

On June 16th, two tornadoes damaged three residence halls, the engineering building, the stadium, and took out 1,000 very old trees in the 57-acre memorial park. The Pioneer Stadium turf was scheduled to be removed this past weekend, with the new turf installation beginning this week. The completion date is early to mid-September.

University of Wisconsin System President Ray Cross and UW-Platteville Chancellor Dennis Shields will hold a press conference and grand re-opening of campus on Friday, Aug. 29 at 11:30 a.m. in the back patio of Engineering Hall.