You are here: Home / News / Candidates Grothman and Harris debate 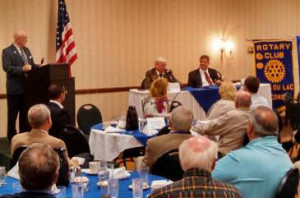 The candidates in the 6th congressional district race staked out some of their priorities, during a debate in Fond du Lac Monday.

Winnebago County Executive Mark Harris is running as a Democrat. He says Congress needs to focus on real solutions to improve the economy.Republican state Sen. Glenn Grothman of Campbellsport says he wants to reform the welfare system. He says right now, single parents have too much to lose by trying to get off of it.
Grothman and Harris are running to replace Congressman Tom Petri of Fond du Lac. The Republican is retiring, after serving for 36 years.
WHBY