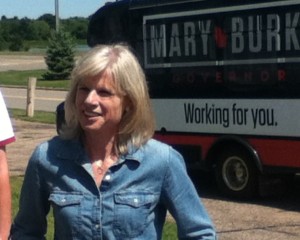 Wisconsin Republicans are accusing Mary Burke of “plagiarizing” some of her jobs plan. One expert says it’s hard to predict what, if anything, this gaffe could mean for Burke.

Portions of Democratic gubernatorial candidate Mary Burke’s jobs plan were copied from other candidates, but her campaign blames a consultant. UW-Madison Political Science Professor Barry Burden says, at the very least, it’s a distraction for the campaign. “She would prefer to be focusing on the fallibility of the Walker Administration and explaining to voters why she deserves to be governor rather than Scott Walker. Instead she’ll have to spend some time explaining the situation, dealing with personnel in her campaign, and trying to maintain her credibility with voters.”

The Burke campaign says an “expert who also works with other campaigns,” is responsible for the copied parts of the plan and he “no longer has any involvement with the (Burke) campaign.”

The past few Marquette Polls show Burke and Republican Governor Scott Walker are in a dead heat. Burden says a gaffe like this might not even matter to a polarized electorate in a 50-50 state. “That makes one think that almost any news would have no effect whether it’s a scandal in a campaign or it is new  economic numbers, about job creation in the state, the budget news that’s come out over the last couple of weeks does not seem to faze people because they view it through the attitudes they already have.”

Burke for Wisconsin Communications Director Joe Zepecki responded to the plagiarism claims in a statement:

“The core strategies Mary Burke outlines and the vision for Wisconsin’s economy that she lays out is entirely her own, and stand unquestioned by anyone. … Among the experts Burke spoke with was an individual who also works with other campaigns … which explains why in a few, isolated instances similar language from those plans is used.”

The revelation was first reported by BuzzFeed News.