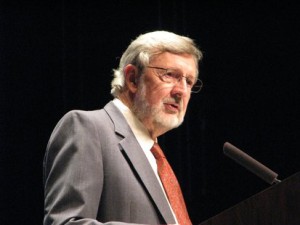 A new facility at the UW-Marathon County is aimed at inspiring the same passion about politics that inspired a long-serving Wisconsin Congressman to represent the state. The David R. Obey Civic Resources Center is named for the former 7th District Congressman, who was elected to the 7th Congressional District in 1962 and retired four years ago.

Obey added that “it’s been politics that gave us Medicare, Medicaid, the Clean Air Act, the Clean Water Act, Public Broadcasting. Politicians made all of those choices, and that’s made the country a better place…All I want it to do is to convince at least one student that politics is worth getting involved in. One person can make an awful difference if they’re willing to work with other people.”

The David R. Obey Civic Resources Center is in the UW Marathon County Center for Civic Engagement, and was put together with Obey’s archives and dollars from both the federal government, corporate and private donors.

When Obey looks back, he says the biggest change in politics is the money. “When I was elected to the (Wisconsin) Legislature the first time, I spent eleven hundred dollars. Today, I’ve seen State Senate seats cost half a million dollars. That’s the worst thing about it.”

Obey is retired, but still engages in political discussions and public forums on occasion. There are things he misses about serving in Congress. “What I miss least is the fundraising and the role of money. What I miss most is just the people. There are a lot of awfully nice, good people in the Congress, and I certainly miss them. They were mostly all friends.”