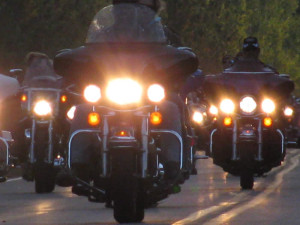 The Tomahawk Fall Ride has already had its first motorcycle crash for the year.

Investigators say the female operator rear ended another motorcycle that had slowed down for turkeys in the roadway. The woman was initially taken to Sacred Heart Hospital, but was transferred to St. Joseph’s Hospital in Marshfield for treatment.

Deputies have not released the names of the people involved, or the extent of the woman’s injuries.

Officials say alcohol use is not a factor in this crash.

The 33rd annual Tomahawk Fall Ride is under way this weekend to raise funds and awareness for the Muscular Dystrophy Association (MDA). The event draws up to 50,000 Harley-Davidson motorcycle riders and visitors to the Northwoods each September with entertainment and the latest motorcycles and accessories from Harley-Davidson.