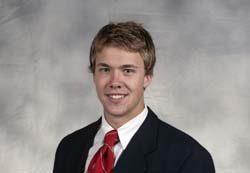 The Minnesota Gophers have been picked as the preseason favorite in the 2014-15 Big Ten men’s hockey coaches’ poll, announced today.  The Michigan Wolverines were picked to finish second and the Wisconsin Badgers third.

Minnesota completed the 2013-14 campaign with a conference record of 14-3-3-0 (28-7-6 overall) and won the inaugural Big Ten Championship.  The Gophers were the No. 1 overall seed in the 2014 NCAA Championship and advanced to the national title game.

The Badgers won the conference tournament title last season, but lost nine seniors and two more players to the pros.

Wisconsin has eleven freshman on this years roster, which is headlined by Hobey Baker finalist and fifth year goaltender Joel Rumpel.

The coaches also selected a 16-member Preseason Players to Watch list, including six unanimous honorees.  Two Badgers are on that list, including Joel Rumpel and forward Joseph LaBate.