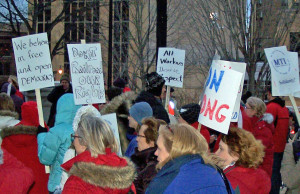 Teachers protest at the Capitol during the debate over Act 10 (File photo: WRN)

A conservative group is suing Madison school officials, claiming they violated a state law that limits collective bargaining with public employees when they took advantage of a judge’s ruling to negotiate a new teachers’ contract.

The Wisconsin Institute for Law and Liberty accuses the Madison School Board, teachers’ union, and school district of acting against the terms of the 2011 bargaining limits. Madison Teachers Incorporated filed suit over Act 10 and Circuit Judge Juan Colas ruled that the law did not apply to them. While the state was appealing that decision, the Madison School Board and teachers negotiated two one-year contracts which run through mid-2016.

The state won its appeal earlier this year, when the Supreme Court ruled that Act 10 is constitutional. The Institute for Law and Liberty argues the Madison district should have known that the new contracts would be found illegal, and it’s asking a Dane County judge to invalidate them.

Republican Governor Scott Walker made the contracts an issue in his re-election campaign against Democrat Mary Burke, who sits on the Madison School Board. She is not named as a defendant in the new lawsuit.

Affiliate WIBA contributed to this report.