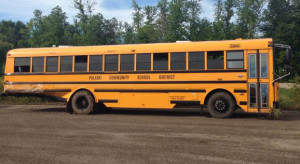 A car passenger was killed and 14 others were injured Tuesday night, when the car collided with a school bus carrying volleyball players from Pulaski High School.

It happened around 9 p.m. on the Highway 29 expressway at Highway 156 near Pulaski. Shawano County sheriff’s deputies said the bus was going north on 156 when the westbound car on 29 struck the rear corner of the bus. The bus then veered into a ditch.

A 24-year-old woman from Athens in central Wisconsin was killed. She was in a car driven by a 27-year-old man from Marathon City, who was hospitalized in critical condition at last word. Sheriff’s officials say 13 Pulaski students were injured on the bus, and at least eight were taken to hospitals by ambulances. Their conditions were not immediately disclosed.

The students were returning from a volleyball match at Seymour High School. Pulaski school officials say counselors will be available today for students needing help in coping with the mishap. An investigation continues.