You are here: Home / News / Report says Wisconsin worst state in nation to be a black child 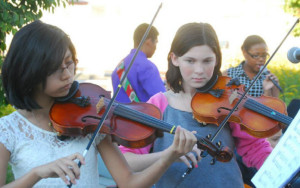 A new report says Wisconsin is the worst place in the entire United States to be a black child.

The study, released Wednesday by the Wisconsin Council on Children and Families, found the Badger State ranks overall last in the nation, based on 12 measures for the well-being of African American children. Those include poverty, parental support, and performance in school.

The Council said four out of every five Wisconsin black children live in low-income families, 70 percent live in single parent homes, and just 10 percent of black eighth graders are proficient in math.

Council executive director Ken Taylor says one of the biggest problems is a general indifference toward the plight of African American youth, which he calls “one of the core challenges we need to face.” Taylor says the lag among black children hurts the state’s economy and quality of life. It also makes Wisconsin “less competitive and less desirable.”

The Council’s report was an extension of the annual Kids Count survey by the Annie E. Casey Foundation, which was released earlier this spring. It showed that Wisconsin was the 13th-best overall for children’s well-being.