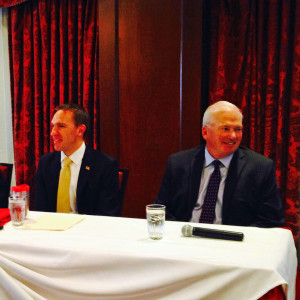 A federal appeals court is set hear arguments over Wisconsin’s voter ID law Friday, with the case going before the 7th Circuit Court of Appeals in Chicago. Judges are being asked to consider whether Wisconsin’s halted voter identification law should be restored, and state Senate Republican leader Scott Fitzgerald (R-Juneau) says the outcome will hinge on which judges actually hear the case.

“I think it depends on which judges in the 7th Circuit are drawn to hear the case. I really think it comes down to that,” Fitzgerald said on Thursday. “There is probably a chance that it could all come together, and that there would photo ID required to vote in November, just like it was in 2012 when we had zero incidents statewide.”

Senate Democratic Leader Chris Larson (D-Milwaukee) argues the voter ID law is a case of the cure being worse than the disease. “I think people figure that out. People are smart, and the courts know that. And it’s not going to be upheld,” Larson said. “It’s not just us, it’s the guy who actually authored the opinion in Indiana, who said ‘look this is just a mechanism to try and stop people who are eligible to vote, and take part in a democracy, from doing just that.'”

Larson and Fitzgerald commented during a WisPolitics luncheon in Madison on Thursday – just a day after state officials announced a new process for helping residents without a birth certificate obtain a free photo ID for voting.