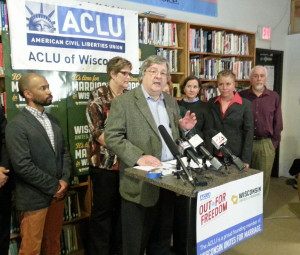 Despite gay marriage now being legal in Wisconsin, the marital status of couples who tied the knot earlier this year remains unclear.

About 500 same sex couples got married in June, after a federal judge initially overturned Wisconsin’s ban. Now that the U.S. Supreme Court has denied an appeal of that decision, questions remain about the status of those marriages and whether the state will eventually recognize them.

Chris Ahmuty is executive director of the American Civil Liberties Union of Wisconsin, which is suing the state to recognize those marriages. He argues “there’s no reason not to do that. Why force them into getting married again? It’s just ridiculous.”

Ahmuty remains hopeful that the state will address the issue soon and move to recognize the marriages performed earlier this year.

A spokesperson with the state Department of Justice declined to comment on the issue. Governor Scott Walker said on Monday that it’s up to the courts to decide.