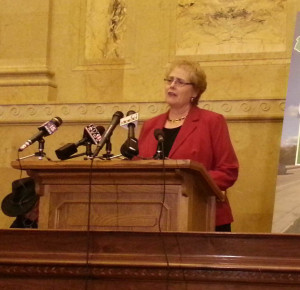 Despite a setback from the U.S. Supreme Court, a longtime advocate of Wisconsin’s gay marriage ban believes the debate is far from being settled.

The nation’s high court on Monday denied a request to hear appeals of lower court decisions that overturned gay marriage bans in Wisconsin and four other states. While the court’s action means same sex couples can once again seek marriage licenses in those states, Wisconsin Family Action President Julaine Appling expects the high court will eventually take up the issue.

Appling points to recent statements from Justice Ruth Bader Ginsburg, who indicated the court often likes to get differing opinions from various appellate courts. She notes that the most recent slate of cases all went against gay marriage bans, so she believes the court may eventually take up a case working its way through the system where a state ban was upheld. “They’re waiting to see if there’s a case coming to them from a district where federal courts rules in support of a marriage amendment.”

Appling, whose group has been fighting for the ban since before the 2006 state constitutional amendment was adopted, admits she was “disappointed” to see Wisconsin’s ban effectively struck down by the courts. However, she says her group will continue working to educate the public about why marriage between one man and one woman is best for the state, “even if at the end the Supreme Court decides they’re going to, by judicial fiat, give us all same sex marriage across the country with a stroke of their pens.”