You are here: Home / News / Mary Burke pushes back on Trek firing claims 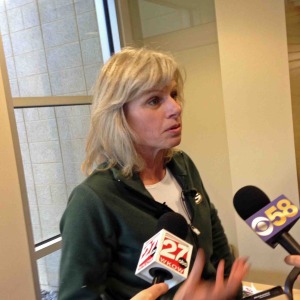 In Appleton on Thursday, the Republican incumbent had little to say. “I don’t have any knowledge about that, so I’ll have to leave that to them. I really can’t comment on something I don’t know much about,” the governor said.

But at a later stop in Sheboygan Walker blamed the media for not vetting Burke properly, telling reporters that they’ve covered his bald spot more than they’ve covered Burke. Walker also said he had known of the claim that Burke was forced out for months, but was not behind the reports. Burke was asked Friday in Madison whether she believed that. “No, I don’t,” she said.

Two former Trek executives have claimed that Burke was fired as head of European operations for Trek. Burke and her brother John, the current head of Trek Bicycle, said Burke left voluntarily in a company reorganization.

Burke’s late father, Richard Burke, founded Trek in the 1970s. Burke was asked about how he would have reacted to the hard-fought campaign for governor. “I think it would have been hard to see the lies and the smears on my reputation and on my career,” she said. “But he gave me the strength to realize I can do this, and I would be a great leader for Wisconsin.”

The allegations surrounding Burke’s performance at Trek came the same week as results from the latest Marquette Law School poll show her trailing Walker among likely voters, 50 percentage points for the governor to 43 percent for Burke.