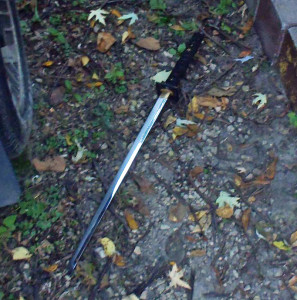 Sparta police have arrested a man for using a sword to threaten three Cub Scouts who came to his door selling popcorn.

Police say 22-year-old Owen Reese opened the door Wednesday while holding a sword above his head and immediately started yelling at the children to leave. Reese got within about five feet of the kids when a parent yelled at them to get away. All three escaped unharmed.

When officers followed up on the report, Reese came out of the residence once again holding the sword, prompting police to aim their weapons at him. Reese quickly complied with an order to drop the sword and was taken into custody. A search of the residence uncovered a large number of knives and swords, as well as marijuana.

Reese told police he always answers the door with a sword to protect himself from religious people.

He was booked into the Monroe County Jail for Recklessly Endangering Safety, and was also cited for drug-related offenses.