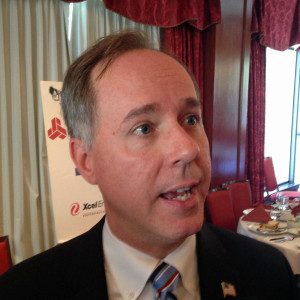 Assembly Speaker Robin Vos said Tuesday that the state Government Accountability Board will not exist in its current form in another two years. Vos made the comment during a WisPolitics luncheon in Madison with state Representative Peter Barca.

Vos was responding to a question from WisPolitics Jeff Mayers regarding campaign finance regulations. “The difference between express advocacy and the different kinds of advocacy is not even a bright line that the GAB could draw,” Vos said, referring to an aspect of the John Doe investigation into alleged coordination between Governor Scott Walker’s campaign and an advocacy group during the 2012 recall election.

“I promise you that two years from now . . . the GAB will not be in the current format” Vos said. “It is dysfunctional, it is unresponsive, and it is totally undemocratic.”

Vos cited the GAB’s decision last month to release a newly redesigned ballot for the November elections. Vos’ reelection campaign and that of Senator Scott Fitzgerald filed a lawsuit over the redesigned ballot, which clerks in a majority of Wisconsin counties elected not to use. The lawsuit was subsequently dismissed over procedural issues, but Vos made it clear Tuesday that he is still bothered by the ballot redesign process, and he laid the blame squarely at the feet of GAB executive director Kevin Kennedy.

“Kevin Kennedy has to go. He needs to be gone. He is an embarrassment, and I can’t say it any more emphatically than I am right now,” Vos said. He offered few specifics on what sorts of changes he envisions for the GAB, which is charged with oversight of Wisconsin’s campaign finance, elections, ethics, and lobbying laws.

“That’s part of what we’re going to talk about with our caucus, but I think it’s important for the public to know that the current Government Accountability Board, under the bureaucrats who are running it, just don’t have the confidence of the public in Wisconsin,” Vos said. “To redesign a ballot in the middle of the election, using a process that would not necessarily be considered bipartisan or nonpartisan, is something that we’re all deeply disappointed in.”

UPDATE: A spokesperson for the GAB declined to comment on Vos’ statements.