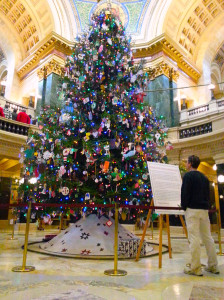 Black Friday is around the corner, but holiday shopping is already under way.

Black Friday traditionally begins on the Friday after Thanksgiving. This year, many stores are opening on Thanksgiving Day, and several retailers are offering deep discounts an entire week earlier than usual.

“Part of the reason for that is Thanksgiving is very late,” says Madison College retail expert Betty Hurd. “So, depending on where it falls on the calendar … sometimes there’s almost six weeks between Thanksgiving and Christmas and it’s as narrow as four weeks. We’re in the most narrow.”

Hurd says the increase could be partly attributed to the ease of shopping online and the ability to plan ahead with mobile apps. “So, you can go and get a Black Friday app very easily and download it and then you have access to the Black Friday ads. So, you can do a tremendous amount of pre-shopping, which is really awesome, and be able to apply your strategy.”