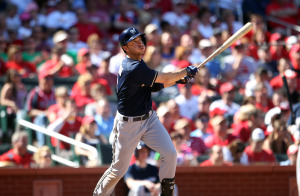 Milwaukee Brewers outfielder Ryan Braun won’t really know how his right thumb will respond to an experimental cryotherapy procedure until he starts to take batting practice and face live pitching on a regular basis.  What Braun does know is his troublesome right thumb feels great and the current status is so far, so good.

Braun was on hand in Milwaukee on Wednesday to participate in the Brewers’ annual Thanksgiving food drive with the Hunger Task Force outside of Miller Park.

Braun said he’s excited but cautiously optimistic by the way his thumb feels.

AUDIO: Ryan Braun on the status of his right thumb :13

Braun underwent the cryotherapy procedure in early October.  It’s a procedure that injects sub-zero temperatures into the damaged nerve in his thumb.  The results were good enough to allow Braun to start swinging a bat shortly afterward with some encouraging results.

Prior to the procedure, Braun struggled through the entire 2014 season where he hit .266 with 19 home runs and 81 RBI.  But as the thumb got progressively worse, Braun’s averaged dipped.  He hit just .226 after the all-star break with 8 home runs and 29 RBI.

If the cryotherapy treatment wear’s off, Braun can undergo another shot.  He said there is no plan to do anything else.

Braun said he’ll have a better idea how things are working once he starts working out and doing hitting activities on a daily basis.  He said that process will start in late December.