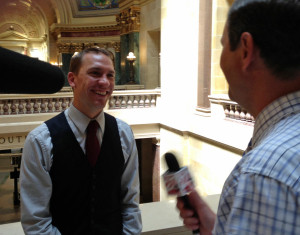 Two years has been enough. State Senator Chris Larson of Milwaukee announced via a Facebook post on Tuesday that he’ll support Senator Jennifer Shilling in her bid to lead Democrats in the Wisconsin state Senate.

“I called Jen Shilling last night to let her know I would be voting for her and would be encouraging my supporters to unite behind her as well. I hope for a united caucus as we prepare to take on the incredible threat ahead. We will do well under her guidance and leadership.”

The decision should clear the way for Shilling, who’s from La Crosse, to lead the Democrats in the Senate, where Republicans will hold an 19-14 majority in the next legislature.

Larson was still in his first term when Democrats elected him as their leader in November of 2012. He took over from Senator Mark Miller of Madison, who served briefly as majority leader following a round of recalls.

Democrats also lost seats in the state Assembly. The outcomes of two races may still be subject to recalls, but if Republicans prevail in both they would hold a dominant 63-36 majority in the chamber, where Representative Peter Barca of Kenosha has served as minority leader.