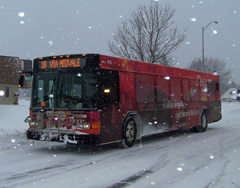 Environmental groups are questioning the Department of Transportation’s budget plan. The biggest problem, according to Shala Werner, Director of the John Muir Chapter of the Sierra Club, is that the DOT budget which was submitted last week by Transportation Secretary Mark Gottlieb moves local transit out of the transportation budget and into the general fund.

“Now what we’re going to see is transit competing with essential services in the general fund, and that’s just not right,” Werner said. “Transit is a form of transportation that needs to stay in the transportation fund.”

The director of the Wisconsin Public Interest Research Group, said that the DOT budget request does nothing to address misplaced spending by the agency. Bruce Speight claims DOT has a record of prioritizing spending on unneeded highway expansion projects over urgent repair of local roads, transit systems, and bridges.

“Raising transportation taxes to pay for unjustified highway expansions is neither fiscally responsible nor in Wisconsin’s best interest,” said Speight. “Governor Walker should reject this tax increase and focus instead on getting Wisconsin’s transportation spending priorities right.”

Walker, attending a meeting of the Republican Governors Association this week, told the Associated Press that significant changes will be made to the DOT budget request. Walker told AP he is “not making absolutes on anything right now,” but that doesn’t mean he would ultimately support a gas tax increase proposed by the DOT.

Republicans who control both chambers of the legislature may prefer to keep transit separate from the transportation budget. Assembly Speaker Robin Vos has pushed for public transit to be funded through the state’s general budget instead of the DOT, saying he considers transit a social program. That state Senate refused to sign off on that in the last session of the legislature.

“You know, it’s not some service or handout,” said the Sierra Club’s Werner. “It’s literally something that reduces pollution, reduces traffic congestion. It gets people around to things that they need to access. It’s good for business.”