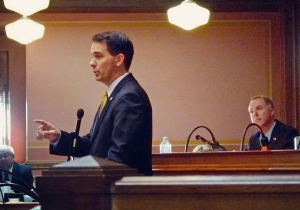 Governor Scott Walker congratulates the new Republican lawmakers in the state Assembly, saying their new majority following the general election gives them a great opportunity to lead. “We have a chance to not only make this state better, but we literally — and I don’t think this is an overstatement — we have a chance to make this country better because for right or for wrong, the people of this country are looking at states like Wisconsin.”

Walker makes a comparison to Washington, says Wisconsin can do better. He says the reason people hate Washington is because they don’t get anything done, they are “dysfunctional.”

Walker tells the Assembly Republicans as they meet to elect their leadership, “It’s important to stick together like a family.” In the next few months, he says, members of the Assembly and the Senate will be more actively engaged … in preparing the legislative agenda and the budget. Walker set out to affirm and grow their partnership.

“We’re a team that’s gonna get things done together. We can show, not only the people of the state, but I think people across the country, that this is what the counter to the dysfunction in Washington is.”