You are here: Home / News / Walker and Burke cross paths in Green Bay 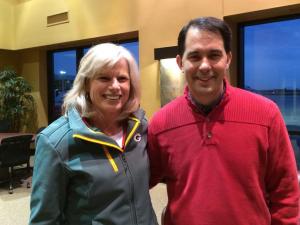 The candidates for Wisconsin governor made last-minute stops in Green Bay on Monday. Governor Scott Walker and Democratic challenger Mary Burke made appearances within a half-hour each other. Walker met with supporters at KI Furniture, while Burke met with volunteers at the Brown County Democratic Party headquarters.

Burke and Walker actually ran into each other at Austin Straubel International Airport. They stopped in the private terminal and posed for pictures which appeared on each candidates’ Tweeter feed.