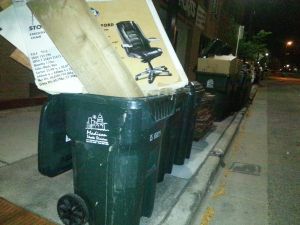 A recent report compiled by the state Department of Natural Resources shows Wisconsin residents recycled more than 830,000 tons in 2013. That’s a 79,000 ton increase over 2012 figures.

Brad Wolbert, DNR Recycling and Solid Waste Section chief, says we recycle more than what is required by law. “Wisconsinites do a great job recycling by and large. We think of it as kind of an ethic that Wisconsinites have. Most of us have grown up recycling and all of our communities have recycling programs, so it just comes naturally to us.”

In a recent statewide survey, 96 percent of respondents identified themselves as having some level of commitment to recycling … which keeps useful materials out of landfills and incinerators.

Wolbert also points to the economic impact of recycling. “We think of it as something that’s good for the environment, but it’s also good for business and industry and for jobs. The materials that we return to the stream of commerce to recycle support jobs.”

Wisconsin recovers 242 pounds of recyclable material per person, including paper products, containers, electronics, tires, appliances, cardboard, and junk mail. Some recyclables should not be put in the curbside bin, such as batteries, light bulbs, pharmaceuticals.

There is a substantial amount of materials that get recycled but is not included in the 830,000 figure. That means the number of items and weight of material being recycled in our state is much more than those passing through a materials recovery facility (MRF).

Wolbert explains that other types of facilities exist to handle certain types of recyclables. For example, he says, oil-based paint and solvents are recovered through clean sweep programs and are recycled or recovered to burn for energy.  Electronics are generally handled separate from the MRFs, as are pharmaceuticals, plastic bags, fluorescent light bulbs, car batteries, and tires. Some scrap metal also has its own system of recovery. This means the weight of recyclables in Wisconsin amounts to much more than the DNR’s figure of 830,000 tons.

State recycling experts say the conveniences of recycling lead to higher participation. One thing that makes recycling easier is the idea of ‘single stream’ recycling collection,” in which all recyclables are deposited in the same bin; another convenience is easy curbside collection.

Saturday is America Recycles Day, bring awareness to the benefits of recycling.