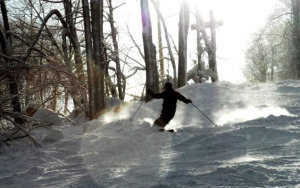 The owner of Wisconsin’s tallest and largest ski area is looking to expand and be more attractive to families and destination skiers.

Skinner says the park near Wausau needs the space to survive past the next generation of skiers. “With competition from the west, with Vale acquiring ski areas in major metropolitan areas, in Detroit, Minneapolis, and supposedly Chicago soon, and offering a nationwide season pass, we need to be particularly compelling to draw people from three to four hours away for a vacation experience.” He says slopes are currently too crowded on some days and that they need to have the extra space for more capacity for skiers. They currently lease 415 acres on Rib Mountain from the Department of Natural Resources and are putting in a request for another 150 acres.

The new section would be built to the west of the existing park, and focus on intermediate and beginner level skiers. “We see this as a big benefit for our family skiers that come from all over the Midwest and also for the local population that wants to learn here and have more of a varied experience.” Skinners say that would also allow for multiple top to bottom ski runs for beginners, something that isn’t available on the current runs on the mountain.

Along with the new ski hills, Skinner says they’re looking towards future expansion and construction of on site, ski-in-ski-out lodging between the current runs and the new expansion. “We don’t have a specific timetable for that, but we’re starting to move forward and do that planning so that in a few years we’d be in a position to develop onsite lodging.” That project would be built on private property that was purchased over a decade ago, and will have to go through the standard zoning and planning process with the Town of Rib Mountain.

The construction would also go through a number of existing hiking and walking trails along the mountain and Skinner says they’ll be working to replace and repair any parts that will be on the new ski runs, as well as adding another large section of trails to go with the expansion. They’re also hoping to increase the summer offerings at the park, including more events like the Fall Colors rides and adding ziplines.

Skinner says they’re hoping to start construction on the new ski hills and lifts by the middle of 2016. That will have to go through planning and zoning processes with the DNR.

A new high-speed lift was added at Granite Peak two years ago to serve the western part of the ski area.