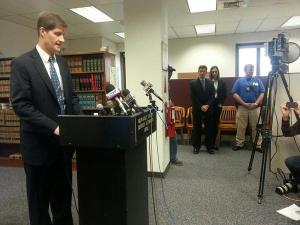 Milwaukee County District Attorney John Chisholm will not file criminal charges against a white former police officer who fatally shot a mentally-ill black man in April. Chisholm said ex-officer Christopher Manney acted in self-defense when he shot Dontre Hamilton, and that Manney’s defense “cannot be reasonably overcome to establish a basis to charge” him with a crime.

“I have come to the conclusion that criminal charges are not appropriate in this case, and I am releasing all the information related to this investigation, so that you the public can see all the facts related to this decision,” Chisholm said during a mid-morning press conference. Hamilton’s family was expected to hold a press conference over the noon hour.

Manney shot the 31-year-old Hamilton during a scuffle on April 30th, after the officer had frisked him from behind. Reports said Hamilton fought the officer once the frisking began. Manney tried using his baton to subdue Hamilton, but Hamilton seized the baton and struck Manney with it. That’s when Manney began shooting, firing a total of 14 times. Reports indicated that Manney was unaware that two officers has already checked on Hamilton the same afternoon in the park, and determined that he was doing nothing wrong. His family said Hamilton was treated for schizophrenia, and was not a violent person.

Police Chief Ed Flynn fired officer Manney in October for violating police procedures in approaching from behind. Manney is appealing his termination, and the police union gave Flynn a vote of no-confidence for what they called a political firing. Hamilton’s family was urging peaceful protests, after the violence from the white-on-black police shooting in Ferguson Missouri.