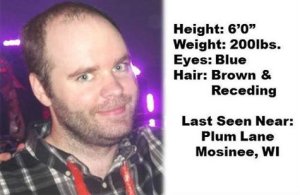 A missing man from the Knowlton area has been found safe and sound.  Authorities asked the public to watch for 33-year-old Andrew L. Meyer Tuesday evening.

Marathon County Sheriff’s Lieutenant Randy Albert says Meyer was found just south of the Highway 34 Lake DuBay bridge.  “The local television stations, seven and nine, led off their (10 o’clock) news stories last evening with the story of the missing Mr. Meyer, and a citizen called us at twelve minutes after ten, so within eleven minutes of those stories airing, he had spotted him walking on State Highway 34 near Graham Lane in the Township of Knowlton.”

Albert says the area resident that spotted Meyer called the Sheriff’s Department and went out to talk to him.  “He did eventually approach him as he was kind of milling around in place. He wasn’t moving, and I believe he went to check on his welfare.”

Meyer was reported missing at around 11:30 a.m. He was not considered dangerous, but was likely in danger without his medication. Deputies believe he crossed the Lake DuBay backwaters heading west.

Albert says everyone is thankful he was found so quickly.  “We had feared the worst, that possibly, he would have been overcome by the elements or possibly fallen into open water in that Lake DuBay-Wisconsin River region, but fortunately, the best scenario played out here and he was located and he is safe.”