You are here: Home / Packers / Packer nation loses one of its former greats! 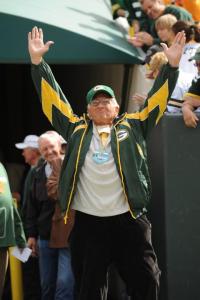 The Green Bay Packers lost one of their former greats today.  80-year-old Fuzzy Thurston, who played left guard on Vince Lombardi’s five NFL championship teams in the 1960s passed away after a battle with liver cancer.

Thurston was a crucial component of the team’s famous power sweep.  Counting his success with Baltimore in 1958, Thurston was a member of six NFL championship teams, including the first two Super Bowl-winning Packer squads.  Over his nine Packers seasons (1959-67), Thurston played in 112 games and was named first-team All-Pro in 1961.  Thurston was inducted into the Packers Hall of Fame in 1975.

Thurston was born and raised in Altoona, a small town near Eau Claire.  Altoona High School didn’t have a football team back then, but Thurston earned a basketball scholarship to Valparaiso University.  He joined the football team as a junior and was drafted by the Philadelphia Eagles in the fifth round in 1956.

Thurston caught on with the Baltimore Colts and was a backup guard for the Colts when they beat the New York Giants in the first sudden-death overtime title game in NFL history.

After Vince Lombardi was hired as head coach of the Packers in 1959, he traded for Thurston and the rest is history.

Thurston was always great with the fans, always smiling, posing for pictures and signing autographs.  Even while going through business troubles during his career.

Thurston lost 11 Left Guard restaurants in the early 1980’s.  Years later, he ended up owning the government $1.7-million in back taxes.  He had his assets and memorabilia seized and sold at auction back in 2011.

Thurston would lose his biggest prize, his wife Susan in 2012.  Now, two years later, they’ll be together again!