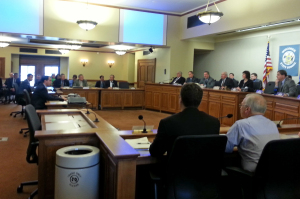 Speaking to the GOP members on Wednesday, Walker restated previous comments that the measure would only be a distraction from more important issues. “We’ve got a lot of big reforms to act on…we’ve got a lot of issues with entitlement reform and tax reform and other reforms we’ve talked about…a lot of things to do in both the Legislative session and the budget…and I just have the concern that sorts of issues, particularly early on, might distract from that work,” Walker said.

The governor, who has supported right-to-work legislation in the past, did not say if he would veto or sign a bill if lawmakers do pass one.

Republican leaders in the Legislature have indicated they plan to take up right-to-work early next year. Those laws typically ban requiring union membership as a condition of employment. The governor said he would rather focus on improving the state’s workforce by helping employers reach workers with the skill-sets needed to fill in-demand jobs.