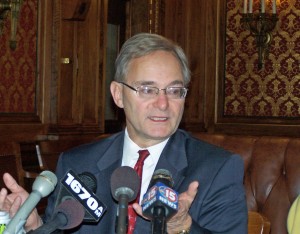 Despite much optimism heading into November, Wisconsin Democrats once again took a hit to their Legislative standing during the mid-term elections. In the Senate, Republicans saw more conservative candidates slip into seats, replacing moderates. In the Assembly, the GOP tightened its control on the chamber by picking up three seats, giving the party its largest majority in the chamber since 1957.

Wisconsin strongly backed Democratic President Barack Obama in 2008 and 2012, but voters turned out for Republicans in 2010 and again in 2014. Assembly Democratic Leader Peter Barca says non-presidential elections are always tough for his party, which is an issue he hopes to focus on in the coming session. “We have sort of a two part strategy electorally, where we’re looking at not only this coming election cycle, but trying to identify how we can engage people more fully and make them understand why it is so vital that they show up at every election cycle.”

Barca says a key part of that effort is getting voters to understand what’s at stake on issues ranging from education funding to the minimum wage. The Kenosha Democrat notes that many communities did back issues his party supports, with voters in conservative-leaning areas also approving referenda on minimum wage increases and accepting federal money to expand Medicaid. However, he says voters need to realize those issues are not likely to see any action under Republican majorities.