You are here: Home / News / Wisconsin National Guard on standby 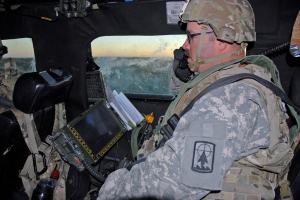 The National guard is standing by, following news that a police officer won’t be charged for fatal shooting in Milwaukee.

Governor Scott Walker says the Wisconsin National Guard is ready — if necessary — to help keep the peace at any protests over the Dontre Hamilton decision.  He says authorities have been preparing. “We’ve had the national guard for weeks now talking with local law enforcement.”

Walker says people have a right to protest, but they don’t have the right to put people’s lives — or property –at risk. He says there won’t be a repeat of last Friday’s demonstration that blocked traffic on I-43 in Milwaukee. “There are peaceful ways that people can protest in public places .. but they can’t shut down a freeway. It’s just unacceptable and it’s not gonna happen.”

Walker says the governor in Missouri was too late, by about a day or two, in responding to the protests in Ferguson.

The governor was in Grand Chute Monday for a announcement about jobs.