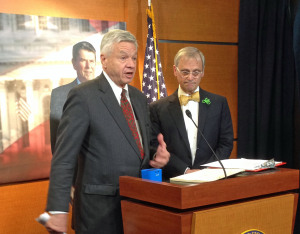 When it comes to pushing policy, perhaps nothing works like a cardboard cutout of President Ronald Reagan. Wisconsin Republican, congressman Tom Petri and Oregon Democrat Earl Blumenauer had the Gipper on hand as they proposed an increase in the federal gasoline tax.

“Ronald Reagan supported raising the gas tax back in 1982 because he believed in funding American infrastructure in a responsible way. I think he was right, and it’s the best course of action we can take at this time,” said Petri, who was first elected in 1979 – the year before Reagan won the 1980 presidential election. Petri chose not to seek reelection in November.

Craig Thompson with Wisconsin’s Transportation Development Association said the federal gas tax has not been raised in twenty years. “It’s been the same since 1993. It hasn’t been adjusted since then. Most of us, if we’re driving cars that get better gas mileage than we did twenty years ago, are paying less than we were 20 years ago in the federal gas tax,” Thompson said.

Federal gas tax revenues make up about twenty-five percent of Wisconsin’s transportation spending, so even a modest increase would help. But – President Reagan notwithstanding – that’s unlikely. “It’s a little hard to picture this congress and president coming together to solve something like this right now, and if they don’t it’s going to be left up to the states to come up with answers on their own,” Thompson said.

Wisconsin is facing a projected $680 million shortfall to fund transportation needs, and the state DOT recently proposed a funding plan that includes an increase in state fuel taxes, something that could be a tough sell in the legislature.