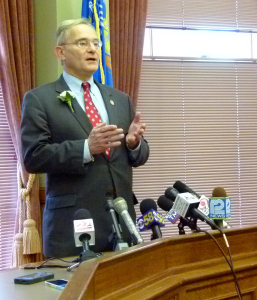 Governor Scott Walker maintains right-to-work legislation would be a distraction in the state, but has stopped short of saying he’d veto any bill that made it to his desk.

Peter Barca (D-Kenosha) is the Assembly minority leader. “There’s no question it would be a distraction,” he says. “I think the governor is absolutely right about that. I’m glad to hear him continue to say that. What I’d like to hear him say over and beyond that, though, would be to say that he would veto it if it reached his desk this year.”

Barca says it’s “totally unnecessary” and Walker needs to take a stand on the issue. “You know, he doesn’t have to limit himself forever more; he could just say this year it’s not appropriate. I’d like to hear him say this term it’s not appropriate. That’s what he suggested on the campaign trail and that’s what Speaker Vos had suggested … that this term we wouldn’t be dealing with polarizing issues like that.”

Barca was reacting to the governor’s inauguration speech, saying he didn’t hear any new ideas.

As for Walker’s potential presidential run, Barca says that could be a distraction. He says, “We need and deserve a governor that’s fully engaged.”

Meanwhile, Barca says growing the middle class is a priority for his caucus.