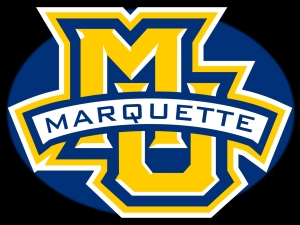 It wasn’t pretty, but the Marquette Golden Eagles prevailed, knocking off Creighton 53-52 in Big East action at the BMO Harris Bradley Center on Wednesday night.

Matt Carlino’s three-pointer with 11.2 seconds left put the Golden Eagles up by 1-point and then watched as the Blue Jays got a good shot off but missed.

Carlino finished with a game-high 19 points, including 11 in the second half.  Duane Wilson was the only other Marquette player to score in the second half, collecting 14 of his 17 points after the halftime break.

Creighton missed 15 straight shots and went without a field goal for 9:33 in the first half.  Marquette used the dry spell to open a 14-point lead.  But the Blue Jays found their way and fought back to take the lead.  They were up by 4-points with two minutes left to play.