You are here: Home / News / Icy project growing in Superior 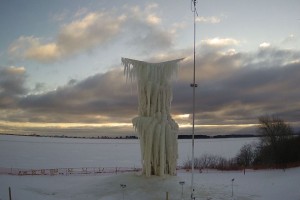 A growing wall of ice on Barker’s Island in Superior is beginning to get some nationwide attention on social media – and a network television crew is due in next week. “Iceman” Roger Hanson, with the backing of the City of Superior, is creating the ice sculpture with financing from the city’s Tourist Development Fund. Despite the weather being warmer than normal the last several weeks, Hanson is hoping to create a wall of ice that will reach 75 feet high and 90 feet wide.

On a website devoted to his ice projects, Hanson explains that he did his first in 2007 for his own curiosity, using water expelled from his home’s geothermal heating system. The Minnesota native is scheduled to talk about his project and answer questions on Saturday at 2:00 p.m.

Family nights are scheduled on the island, with special light shows on February 14th and 21st and will include fireworks on the 28th.