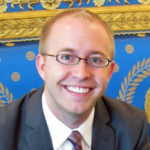 There’s another candidate in the running to lead the Democratic Party of Wisconsin. Jason Rae, a member of the Democratic National Committee from Rice Lake, says he wants to fill the party chair’s post which is being vacated by Mike Tate, who won’t serve another term.

“One of the things I want to focus on as state party chair is really looking at how we can regroup, refocus and reenergize the party,” Rae said. Democrats have “a lot of work to do, particularly in rural communities. For me it’s disappointing that I see people who I grew up, and neighbors in Barron County and northern Wisconsin, who are voting Republican. They’re voting against their own interests sometimes.” Rae also identifies building party infrastructure at the local level as a priority.

Joe Wineke, a former state legislator from Dane County who served as DPW chair prior to Tate, is also interested in the job. A third potential candidate, Mary Lang Sollinger of Madison, said she hasn’t yet made a decision on whether to seek the post.