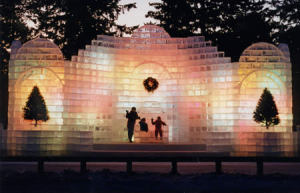 A famous Northwoods attraction won’t be built this year thanks to uncooperative weather.

The Eagle River Ice Castle is usually constructed by this time, but fire chief Patrick Weber says they just couldn’t safely go out to get the ice for the palace. “We’re still sitting with some pockets of water trapped in between the ice. We need a foot of ice to safely work there, and we’re only sitting at 9 to 10 inches.”

Weber says at this point they won’t be able to build the castle with the time remaining before upcoming snowmobile races. “We’re disappointed just as much as the people who’d come up to take pictures of it. Last year we were able to do it after a two year absence. Other years we’ve had cycles where we’ve missed a year because of weather conditions.”

Weber says that next year, crews will be doing some prep work to help clear the ice to make it thicker where they need to work.