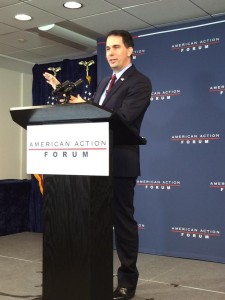 Governor Scott Walker spoke in Washington DC Friday on a variety of thoughts and ideas with a national perspective.

As commander-in-chief of the Wisconsin National Guard, Governor Walker told the Washington audience he has concerns about threats posed by ISIS and other enemies abroad, and the impact on Wisconsin.

The guard’s adjutant general is also the governor’s homeland security adviser, keeping Walker informed on confidential security threat assessments. “I see on an ongoing basis legitimate concerns about the threat to national security state by state and across this country.” That’s why, the potential presidential candidate said there’s a need for affirmative, solid leadership in Washington.

AUDIO: Walker said the threats from this nation’s enemies are to be taken seriously. “To me it’s not a matter of if there’s another attempt on American soil, it’s a matter of when.” :24

If in a position to do so, Walker said he would do everything in his power to make sure families could sleep safely at night knowing someone was looking out for their best interest and security. Walker was participating in a lecture series in the nation’s capitol.

Walker kicked off the American Action Forum’s Fred Malek Lecture Series, which, according to their website, provides an opportunity for leading policymakers and thought leaders to discuss solutions to pressing national policy problems.