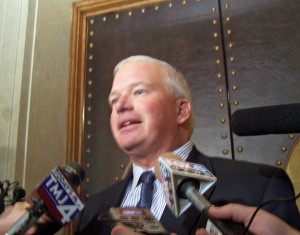 Republican leaders in the state Legislature are showing caution over the possible future of tax cuts this session.

With the state facing a possible $2.2 billion budget deficit, Senate Majority Leader Scott Fitzgerald (R-Juneau) says another round of income or property tax cuts could be a difficult sell with Republicans. “I wouldn’t say either one of them are off the table. But, what I would say is, in a very tight budget situation that we find ourselves in, it’s going to become more and more difficult to talk to members and says this is something that should be a priority.”

Fitzgerald blames the projected shortfall on what he calls a slowdown in economic activity currently facing the state. He says that’s going to make some members very cautious. Because of that, he says “it’s pretty difficult to forecast as we stand here today what may gain momentum” when talking about taxes.

Assembly Speaker Robin Vos (R-Rochester) has voiced similar concerns, adding that a small reduction is possible but he does not see any sizable cuts being made early on this session as lawmakers prepare to start work on the next state budget.