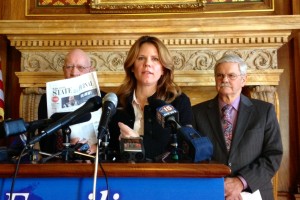 Governor Scott Walker won’t formally introduce his two year budget plan until Tuesday night, but a group of Democrats from Dane County spoke with media on Monday concerning their criticisms and suggestions for what direction the state should be headed. State Representative Chris Taylor (D-Madison) said the general outlines of the governor’s 2015-’17 budget plan are already cause for concern – because of his ambitions beyond Wisconsin.

“He seems more concerned with Iowa primary voters than the people in the state of Wisconsin,” Taylor said. “His presidential ambitions are clearly coming first.” A Bloomberg Politics/Des Moines Register Iowa Poll of of 402 likely Republican caucus attendees, released over the weekend, put Walker ahead of all other potential Republican presidential candidates, at 15 percent. Kentucky Senator Rand Paul was a close second at 14 percent.

Walker’s budget will have to contend with a projected revenue shortfall of some $2.2 billion dollars. The Democrats call that “self-inflicted,” referencing a report in Monday’s Wisconsin State Journal. “Governor Walker made some bad decisions, and the result of that is a $2.2 billion deficit,” said state Senator Mark Miller (D-Monona).

Democrats urge the Walker administration to accept federal money to expand the state’s Badgercare program, arguing that could which could bring in an extra 300 million dollars over the two year budget cycle. “We are paying more money to cover less people. That makes no sense,” Taylor said. “Why on earth would our governor pursue those kinds of policies.”

“I think that most independent analysis has said that we are leaving money on the table,” said Marquette University political scientist Charles Franklin. “Governor Walker argues that that’s a short-term benefit but a long term risk, because the federal government may not follow though with its payments.”

Walker is scheduled to deliver his state budget message tomorrow night at the state Capitol in Madison. Walker spokeswoman Laurel Patrick told the State Journal that the state will end the fiscal year on June 30 with a balanced budget, without providing details on how that might happen.

State Senator Fred Risser (D-Madison) predicted Walker will cut taxes and increase borrowing. “That’s the way he’s running the government,” Risser said. It’s unclear if the governor will propose tax cuts, but there will be borrowing to fund transportation projects.