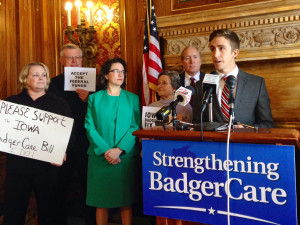 Two years after Walker and Republicans in the legislature changed the eligibility requirements for Wisconsin’s BadgerCare program – a change which resulted in the elimination of coverage for about 77,000 state residents – Representative Daniel Riemer (D-Milwaukee) and Jon Erpenbach (D-Middleton) are proposing a plan which they hope will draw bipartisan support.

Their proposal stops short of full Medicaid expansion in Wisconsin. “Republican legislative leaders and the governor have made it clear that that traditional Medication expansion would not be considered, so this is an attempt to use a different, more bipartisan approach, with admittedly less savings,” said Riemer.

Riemer said the state could accept some federal money to expand BadgerCare, guaranteeing health coverage to more than 80,000 uninsured while providing the state with some $240 million dollars that could be used to offset budget cuts.

“When the Joint Finance Committee is looking at this budget and thinking about how many unpopular, damaging choices and disinvestments they’re making, they’re going to say ‘my goodness, we can cover more people for less money, we can prevent cuts,’” said Robert Kraig with Citizen Action of Wisconsin.

“Wisconsin has found a good middle ground,” said Assembly Speaker Robin Vos. “The federal government takes care of individuals not in poverty; Wisconsin takes care of people who are.”