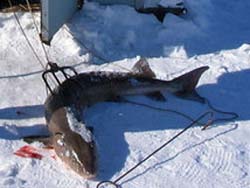 Sturgeon spearers had to deal with cold and windy conditions over the weekend, but that did not appear to impact their totals much.

The season got off to a strong start on Lake Winnebago on Saturday, with the fifth-highest total in the last 13 years. Spearers got 467 sturgeon on the opening day – about 100 more than the average year. For the entire weekend, the total on the big lake was almost 875 fish.

People did not fare as well on the Upriver Lakes this year. The opening day total of 126 was the second fewest since the DNR created a lottery system, eight years ago. DNR sturgeon biologist Ryan Koenigs says the season will probably last two or three more days on the Upriver Lakes, where they are at about 72 percent of the female harvest cap.

Koenigs says it’s difficult to project how long the Lake Winnebago season could close. He says it might be as early as Thursday, or as late as Sunday.