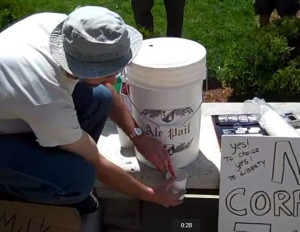 State officials have suspended the license of a Pepin County dairy farm that supplied the raw milk tied to an outbreak that sickened 32 people last fall. The Department of Agriculture, Trade, and Consumer Protection says Roland and Diana Reed of Arkansaw have agreed to penalties in the case, which includes a 30 day suspension of their farm’s Grade A permit.

In a release, Dr. Steve Ingham, administrator of the Division of Food Safety for DATCP, said “after reviewing the circumstances described in the final DHS epidemiological and laboratory  report, we have determined that the farm violated current statutes and rules by distributing unpasteurized milk in an unauthorized manner, so we are taking appropriate action,.”

DATCP said the farm provided unpasteurized milk to a Durand high school football team dinner last fall, which cause an outbreak of a foodborne illness that sickened 32 students and coaches. Some of the students had to be hospitalized and several were unaware they were drinking raw milk.

The farm can keep selling its milk for cheese and butter production during the suspension, but could face further suspensions or have their license revoked if they violate the terms of the agreement with the state over the next three years.