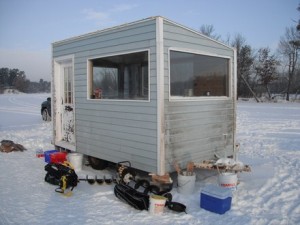 An early thaw means you probably shouldn’t be waiting to get your ice shanty off your favorite lake.

State regulations require that those shacks be removed by Sunday off of all inland waters north of Highway 64, but Department of Natural Resources officials say that might be difficult if you can’t get a truck out to the shanty. “Depending on where you are, you may need to walk instead of drive, especially coming up here in the next few days with this warmer weather.” Marathon County warden Ben Herzfeldt he didn’t see any problems with shack removal in the Wausau area, where the deadline was Sunday the 8th.

Failure to remove that shack can get very pricy. “Typically that ranges around 200 dollars for failing to remove your ice shanty daily while it’s not occupied. If shanties are left out and the Department has to remove them before they go through the ice, the owner can be charged for the removal fees as well.” If it does go into the water, Herzfeldt says you’ll be on the hook not only for pulling it out of the lake, but any associated cleanup as well.

If you do want to get out on the ice, Hertzfeldt says portable shelters are just fine. In fact, he says many people will be using those right up until they can’t make it out anymore. “People will still utilize this late ice for pan fishing, which can be pretty popular and productive late in the season here in the next few weeks.

People just need to keep in mind to be safe as the ice conditions will start to deteriorate as the warmer weather continues.”