You are here: Home / News / Naming rights for state parks? 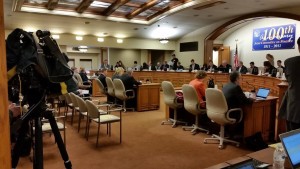 The question of naming rights was brought up during budget briefings at the state Capitol.

Wisconsin Department of Natural Resources Secretary Cathy Stepp stressed to members of the Joint Finance Committee that her agency needs to find new ways to generate revenue for the state park system.

“Well,” Stepp responded, “we’re currently not looking to do that now, but these are all gonna be parts of the discussion that I look forward to getting legislative input on in the next two years.”

The DNR won’t sell the parks, Stepp said, and there have not been any discussions or studies on naming rights. No corporations have approached her about naming rights, though Stepp said external partners could provide concessions or sponsorships.

“How much would you charge,” Erpenbach asked, “for example, to buy the naming rights to Devil’s Lake state park?”

“Senator,” Stepp replied, “it’s very premature to talk about that.”

The DNR could authorize sponsorships and naming rights without legislative approval.