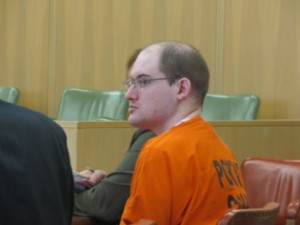 Testimony has been completed in the homicide case against a Plover man accused of beating his stepfather with an aluminum baseball bat.

Prosecutors say 33-year-old Andrew Pray struck 77-year-old Christopher Bonnstetter between two and four times with intent to kill him. The defense team says Pray intended to hurt Bonnstetter but not kill him, and urged the jury to convict his client of a lesser charge of reckless homicide.

Pray has several neurological disorders including Autism. Much of the defense testimony focused on how Andrew Pray doesn’t process information or handle relationships like most people. The defense claims Pray was trying to hurry his mother Jennifer into proceeding with her divorce. There was a long history of conflict between Bonnstetter and his wife and stepson.

The seven men and seven women of the jury will return to begin deliberations at 8:30 a.m. Thursday, and the court will at that time send the alternate jurors home. Before that, Judge Thomas Eagon will announce his decision on a defense motion to declare a mistrial. Attorney Nathan Otis objected to prosecutor Cass Cousins comments during closing arguments asking the jury to put themselves in someone else’s shoes. Judge Eagon quickly sustained Otis’ objection, but it was said. Eagon acknowledged during discussion of the motion that a rule was broken, and he will rule on the motion at 8:00 a.m. before the jury returns.

Christopher Bonnstetter was attacked as he lay resting on his living room floor last May 26th. Jennifer Pray was watching The Waltons on TV close to Bonnstetter, but was unable to help her husband.