As he wraps up working for the State Department, former U.S. Senator Russ Feingold says he plans to travel Wisconsin “extensively” as he explores his plans for the future.

In a post on Facebook Tuesday morning, Feingold thanked President Obama and Secretary of State John Kerry “for the opportunity to serve our country and represent America’s ideals in one of the most challenging yet promising regions of Africa.” The former Democratic lawmaker has been serving as the U.S. special envoy to the Great Lakes and the Democratic Republic of the Congo. 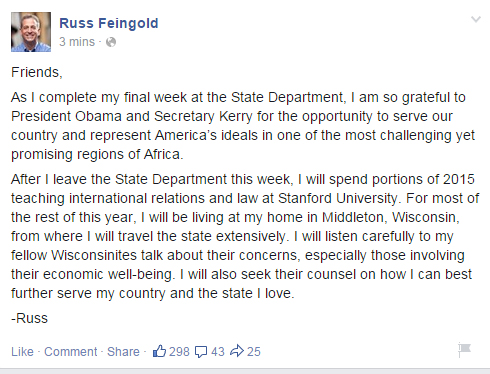 Feingold says he plans to spend portions of the year teaching international relations and law at Stanford University, while continuing to live in Middleton, a Madison suburb. From that home, he plans to travel the state and “listen carefully to my fellow Wisconsinites talk about their concerns, especially those involving their economic well-being. I will also seek their counsel on how I can best further serve my country and the state I love.”

Feingold served in the U.S. Senate until he was defeated by Republican Senator Ron Johnson in 2010. Johnson is up for re-election in 2016, and there has been speculation that Feingold may try to challenge him.